Tematica 1: Magmi e sistemi di alimentazione
Bonechi B., Gaeta M., Perinelli C., Moschini P., Romano C., Vona A. (2022)
Micro-Raman water calibration in ultrapotassic silicate glasses: Application to phono-tephrites and K-foidites of Colli Albani Volcanic District (Central Italy).
Chemical Geology, 597, 120816
https://doi.org/10.1016/j.chemgeo.2022.120816
Data di pubblicazione: 25/03/2022
PubAIV-ID-00059 - Articolo in Rivista (non-open access)
Abstract
This study investigates the potential use of micro-Raman spectroscopy for the quantification of water in ultrapotassic silicate glasses. A calibration was developed using experimental phono-tephritic glasses with water content ranging from ~ 1 to ~ 3 wt%. The calibration curve showed a typical direct proportionality between water content and the ratio of high- (3100–3750 cm−1) and low-wavenumber (100–1500 cm−1) spectral regions, with a linear fit coefficient m = 1.74. The comparison with the m coefficients available in literature for other silicate compositions showed a deviation of our composition as a function of some major oxides such as FeO, TiO2 and K2O, highlighting the possible influence of the polymerization degree (NBO/T: non-bridging oxygens per tetrahedron) on m coefficient. In this respect, we observed a linear relationship between m coefficient and NBO/T and a positive correlation between the area underneath the silicate region (100–1500 cm−1) and NBO/T for the phono-tephrite of this study and for other compositions spanning from basalts to phonolite and rhyolites available in literature. For ultrapotassic natural and experimental glasses characterized by the presence of CO2, documented by the carbonate peak at 1062–1092 cm−1, it has been possible to extrapolate the CO2 content by using the model of Morizet et al. (2013) obtaining values of ~ 1.1 ± 0.3 and ~ 1.7 ± 0.2 wt%, respectively. The obtained m coefficient was applied to estimate water content of natural phono-tephritic glasses belonging to the Colli Albani Volcanic District. Moreover, we estimated water content also for some natural K-foiditic glasses from the same volcanic district. Since the m coefficient results to be strongly dependent on the chemical composition of the sample of interest, the coefficient estimated for the phono-tephrites of this study could result in significant overestimation or underestimation of the water content of the Colli Albani Volcanic District K-foiditic natural samples. Thus, we extrapolated the m coefficient for the K-foiditic samples by means of an equation obtained in this study as function of the polymerization degree (NBO/T).
Riassunto dello studio (Plain Language Summary) 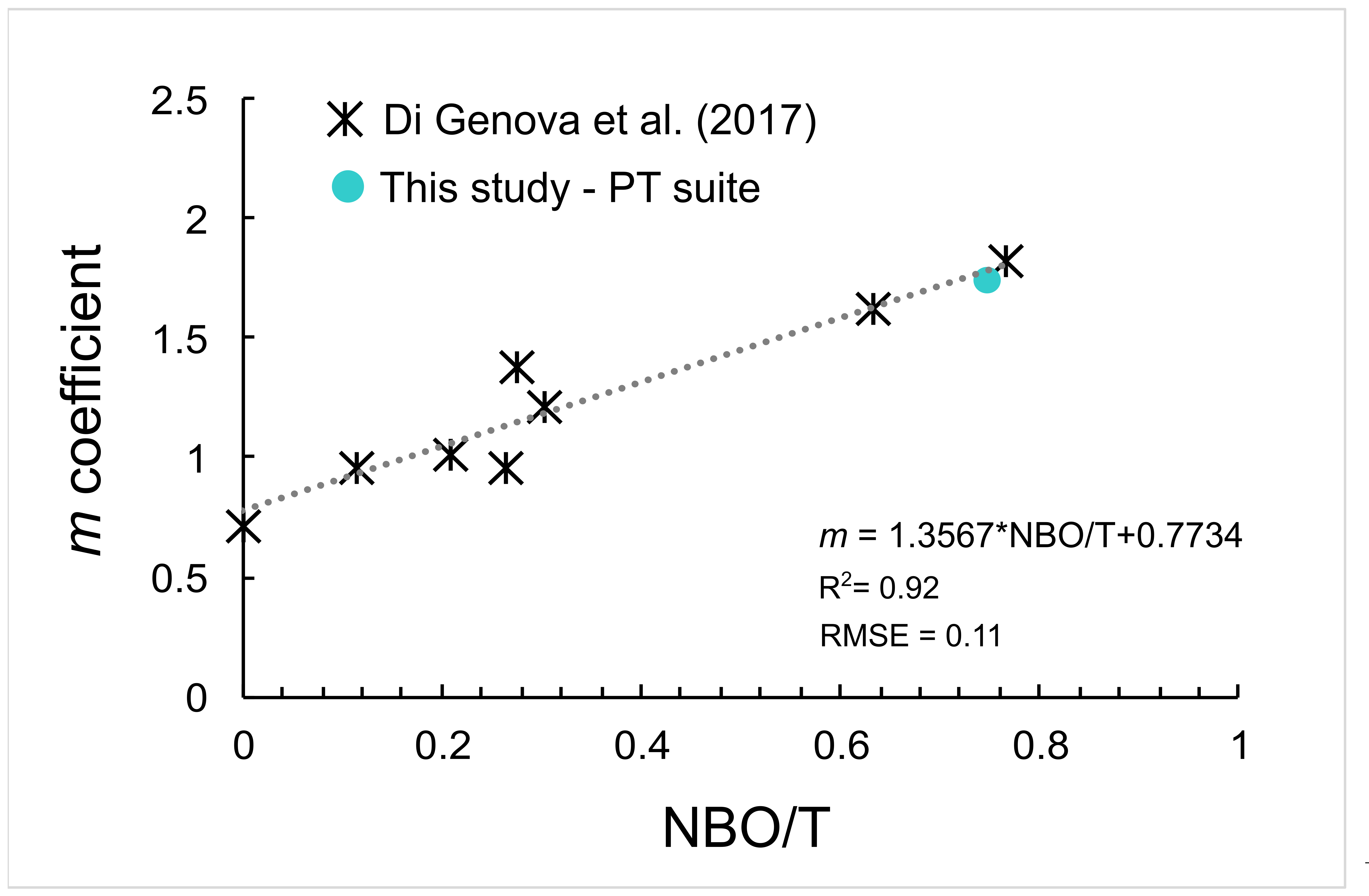 The South-East crater of Etna (SEC) is the most active summit crater over the last 20 years, producing lava fountains in 2000, 2007–08, and 2011–14. It has been monitored by the INGV Etna Observatory by instrumental networks, field surveys and petrologic monitoring. The syn-eruptive petrologic monitoring consists of an articulated work chain which is generally carried out within 24 h from the moment the sample was emplaced to detect possible changes of magma composition episode by episode, as well as over a longer period. The findings of petrologic monitoring are integrated with the results provided by geophysical networks and gas geochemistry to check the volcano’s behavior during the eruption and to communicate potentially dangerous variations in eruptive features to the local authorities. This paper presents the variation of volcanic glass compositions during the paroxysmal activity of the SEC, which began in
December 2020 and climaxed with 17 episodes from 16 February to 1 April 2021. We infer preeruptive magmatic processes (e.g., fractional crystallization and mixing) based on temporal trends of some key compositional parameters (i.e., CaO/Al2O3; FeOtot/MgO). Correlation between magma dynamics and volcanological characteristics of the paroxysms requires future studies. We demonstrated that petrologic monitoring carried out during a volcanic crisis at Etna, as well as in other volcanoes worldwide, maybe crucial to acquire preliminary insights into the structure of the plumbing system and the pre-eruptive processes governing the eruptive activity. Interestingly, this goal has been achieved also thanks to the collaboration with local citizens, who kindly contributed to collecting samples. 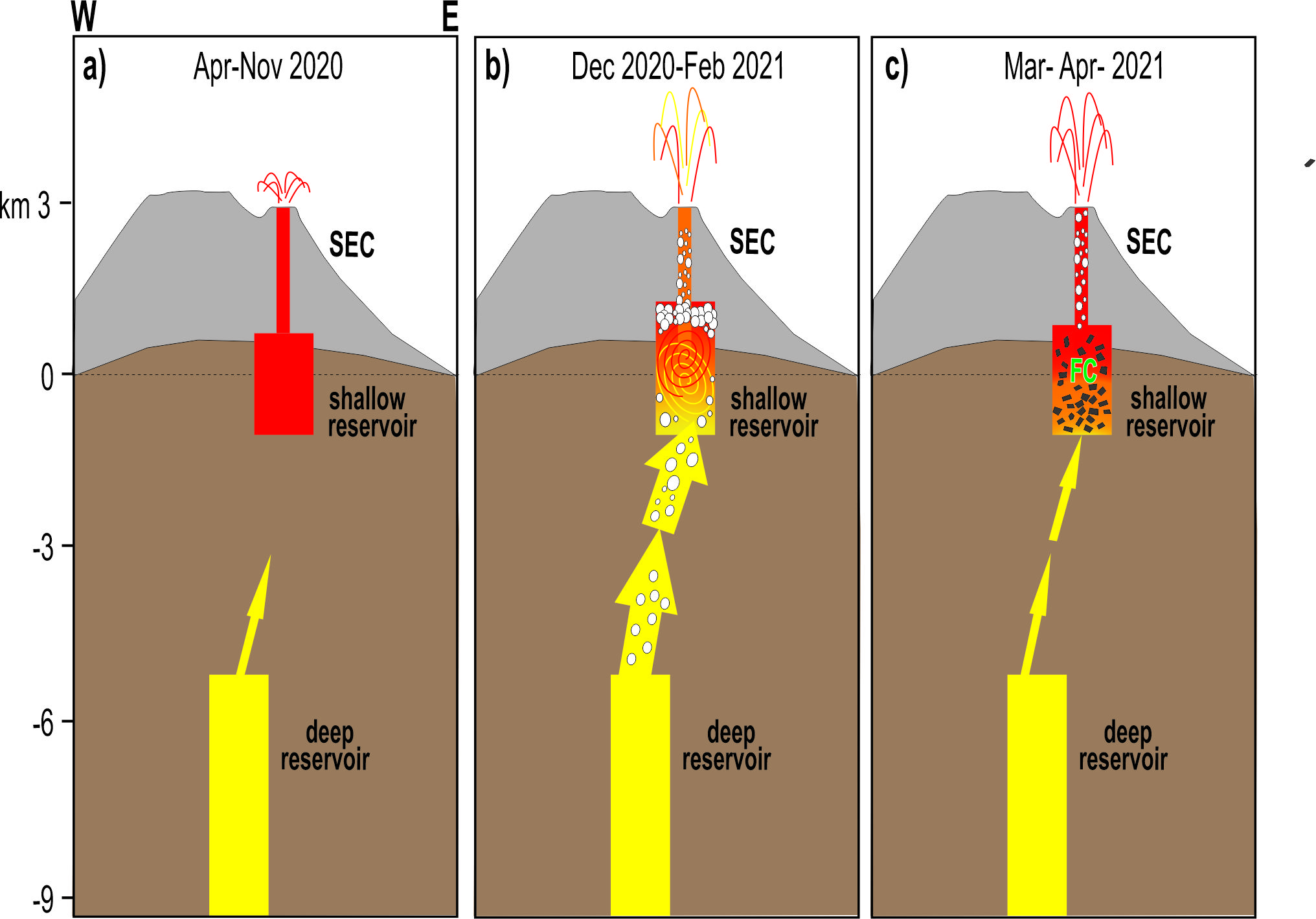 The structure of an active volcano is highly dependent on the interplay between the geodynamic context, the tectonic assessment as well as the magmatic processes in the plumbing system. This complex scenario, widely explored at Etna during the last 40 years, is nevertheless incomplete for the recent historical activity. In 1763 two eruptions occurred along the west flank of the volcano. There, an eruption started on 6th February and formed the scoria cone of Mt. Nuovo and a roughly 4-km-long lava flow field. Another small scoria cone, known as Mt. Mezza Luna, is not dated in historical sources. It is located just 1 km eastward of Mt. Nuovo and produced a 700mlong flow field. We focused on the activity of Mts. Nuovo and Mezza Luna for several reasons. First, the old geological maps and volcanological catalogues indicate that Mt. Mezza Luna and Mt. Nuovo cones were formed during the same eruption, while historical sources described Mt. Nuovo’s activity as producing a single scoria cone and do not give information about the formation of Mt. Mezza Luna. Second, petrologic studies highlight that the products of Mt. Mezza Luna are
similar to the sub-aphyric Etna basalts; they preserve a composition relatively close to Etna primitive magma which were also erupted in 1763, during La Montagnola flank eruption, which took place along the South Rift of the volcano. Third, the two scoria cones built up along the so-called West Rift of Etna, which represents one of the main magma-ascent zones of the volcano. We applied a multidisciplinary approach that could prove useful for other volcanoes whose past activity is still to be reconstructed. Critical reviews of historical records, new field surveys, petrochemical analyses and petrologic modelling of the Mts. Nuovo and Mezza Luna eruptions have been integrated with literature data. The results allowed improving the stratigraphic record of historical eruptions reported in the Mount Etna Geological map, modelling the sub-volcanic magmatic processes responsible for magma differentiation, and evidencing recurrent mechanisms of magma transfer at Etna. Indeed, the intrusion of a deep primitive magma along the South Rift is often associated
with the activation of other rift zones that erupt residual magma stored in the shallow plumbing system. 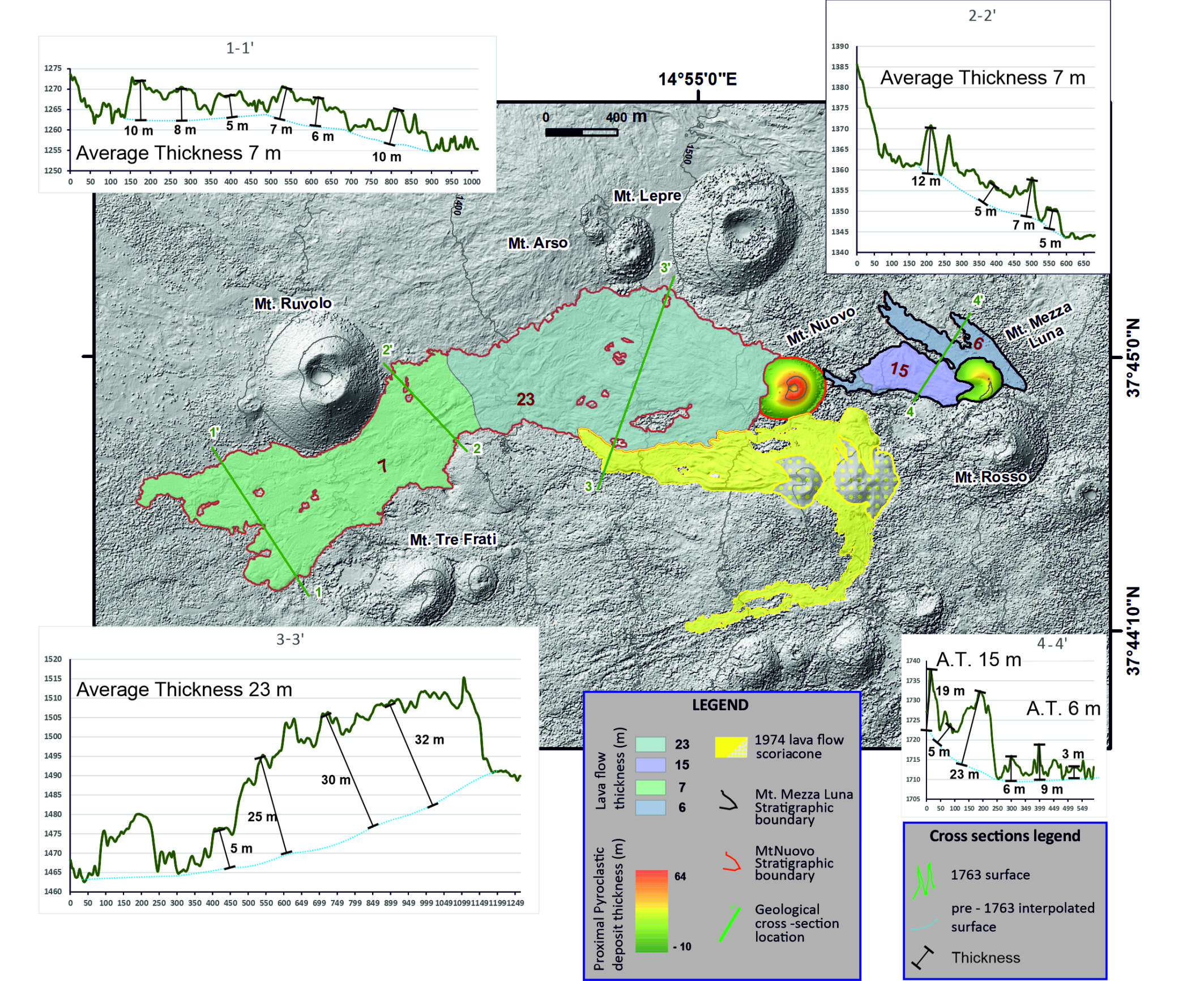 Pichavant M., Di Carlo I., Pompilio M., Le Gall N. (2022)
Textural and petrological features of Stromboli golden pumices require short timescales for paroxysm initiation mechanisms.
Bulletin of Volcanology, 84, 36
https://doi.org/10.1007/s00445-022-01545-9
Data di pubblicazione: 11/03/2022
PubAIV-ID-00058 - Articolo in Rivista (open access)
Abstract
New textural and petrological data are presented on products from five paroxysms at Stromboli (Aeolian Islands, Italy) including the two from 2019 and three historical (1930, undated, sixteenth century) eruptions. The data are used to con- strain timescales associated with the initiation of paroxysms and to examine current models for their triggering. Samples were collected from the deposits and a subset selected for mineral separation and petrological and textural characterization. Minerals and glass were imaged by scanning electron microscopy (SEM), and chemical composition and zonation were analysed by electron microprobe. Trace elements in olivine were also determined. Vesicle number densities, vesicularities and vesicle diameters were measured by X-ray microCT techniques. The data were systematically compared with results of experiments simulating, on the one hand, ascent, vesiculation, degassing and crystallization of LP (low-porphyricity) magma and, on the other hand, interaction between LP and HP (high-porphyricity) magma. Paroxysm samples are mixed and include portions representative of both LP and HP magma. They host in variable proportions minerals and glass textur- ally and compositionally typical of these two magma types. Small but systematic variations in matrix glass compositions are found between each of the five eruptions considered. All samples host a population of vesicles ranging from 1000 μm in diameter and whose size distributions follow mixed exponential to power law distributions. Vesicularities are high (75% on average) and vesicle number densities range from 10 2 -10 3 to 10 3 -10 4 mm -3 . Using experimental calibrations, the vesicle textural data suggest average LP magma ascent rates of 1–2 m/s (i.e. ~1.5 hours from depths between 7 and 1.5 km). The correlation between ascent rate and textures demonstrates systematic variations between eruptions, the most ener- getic (i.e. that of 1930) being associated with the highest ascent rate (~2 m/s). Widths of plagioclase reaction zones indicate that LP and HP magmas interacted for a maximum a few hours before eruption. Olivine reaction also implies durations of a few hours for LP-HP interaction and is followed by crystallization for 20 hours in the HP magma. Our results stress the fast ascent of LP magma from their storage region and their short residence times at shallow levels before being erupted. They clarify the respective roles of the deep and shallow feeding systems. An integrated phenomenological model for paroxysm initiation at Stromboli is outlined.
Contatto
Ida Di CarloSocio AIVQuesto indirizzo email è protetto dagli spambots. È necessario abilitare JavaScript per vederlo.
Tematica 2: Dinamiche eruttive e di messa in posto
Scarani A., Vona A., Di Genova D., Al‑Mukadam R., Romano C., Deubener J. (2022)
Determination of cooling rates of glasses over four orders of magnitude.
Contributions to Mineralogy Petrology, 177, 35
https://doi.org/10.1007/s00410-022-01899-5
Data di pubblicazione: 01/03/2022
PubAIV-ID-00060 - Articolo in Rivista (open access)
Abstract

Volcanic materials can experience up to eleven orders of magnitude of cooling rate (qc) starting from 10^(–5) K/s. The glassy component of volcanic material is routinely measured via differential scanning calorimeter (DSC) to obtain qc through the determination of the glass fictive temperature (Tf). Conventional DSC (C-DSC), which has been employed for decades, can only access a relatively small range of qc (from ~10^(–2) to ~1 K/s). Therefore, extrapolations up to six orders of magnitude of C-DSC data are necessary to derive qc of glasses quenched both at extremely low and high qc. Here, we test the reliability of such extrapolations by combining C-DSC with the recently introduced flash calorimetry (F-DSC). F-DSC enables to extend the qc exploration up to 10^4 K/s. We use three synthetic glasses as analogs of volcanic melts. We first apply a normalization procedure of heat flow data for both C-DSC and F-DSC to derive Tf as a function of experimental qc, following the “unified area-matching” approach. The obtained Tf–qc relationship shows that Arrhenius models, widely adopted in previous studies, are only valid for qc determination within the calibration range. In contrast, a non-Arrhenius model better captures qc values, especially when a significant extrapolation is required. We, therefore, present a practical “how-to” protocol for estimating qc using DSC. 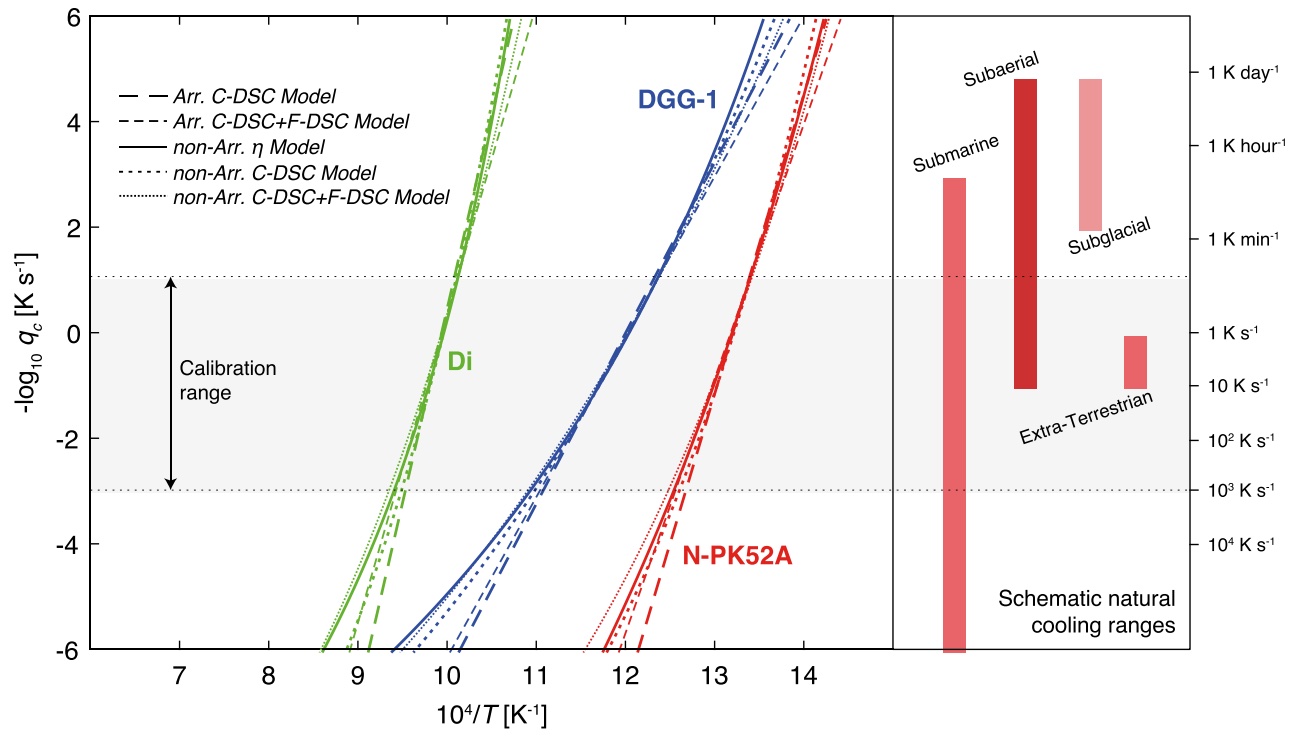 The gradual temporal shift of the spectral lines of harmonic seismic and/or acoustic tremor, known as spectral gliding, has been largely documented at different volcanoes worldwide. Despite the clear advantage of the experimental approach in providing direct observation of degassing processes and related elastic radiation, experimental studies on gliding tremor are lacking. Therefore, we investigated different episodes of gliding of acoustic and seismic tremor observed during analogue degassing experiments performed under different conditions of magma viscosity (10-1,000 Pa s), gas flux (5-180×10−3 l/s) and conduit surface roughness (fractal dimension of 2-2.99). Gliding experimental harmonic seismic and acoustic tremor was observed at high gas flux rates and viscosities, mostly associated with an increasing trend and often preceding a major burst. Decreasing secondary sets of harmonic spectral lines were observed in a few cases. Results suggest that gliding episodes are mostly related to the progressive volume variation of shallow interconnected gas pockets. Spectral analyses performed on acoustic signals provided the theoretical length of the resonator that was compared against the temporal evolution of the gas pockets, quantified from video analyses. The similarities between the observed degassing regime and churn-annular flow in high viscous fluids encourage further studies on churn dynamics in volcanic environments.

The Moderate Resolution Imaging Spectroradiometer (MODIS) is one of the most-used sensors for monitoring volcanoes and has been providing time series of Volcanic Radiative Power (VRP) on a global scale for two decades now. In this work, we analyzed the data provided by the Visible Infrared Imaging Radiometer Suite (VIIRS) by using the Middle Infrared Observation of Volcanic Activity (MIROVA) algorithm, originally developed to analyze MODIS data. The resulting VRP is compared with both the MIROVAMODIS data as well as with the Fire Radiative Power (FRP), distributed by the Fire Information for Resource Management System (FIRMS). The analysis on 9 active volcanoes reveals that VIIRS data analyzed with the MIROVA algorithm allows detecting ~60% more alerts than MODIS, due to a greater number of overpasses (+30%) and improved quality of VIIRS radiance data. Furthermore, the comparison with the nighttime FIRMS database indicates greater effectiveness of the MIROVA algorithm in detecting low-intensity